Start up your start-up at CIC in Cambridge / Boston Metro Guide to Cambridge, April 29, 2014 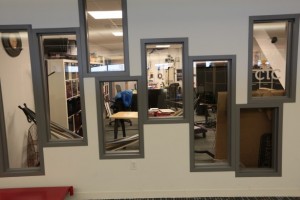 You could make your first million at the Cambridge Innovation Center. / Credit: Nicolaus Czarnecki

There are dozens of hoodies on the fifth floor of 1 Broadway. They are on the heads of thirty-something start-up CEOs mingling with venture capitalists, members of the Canadian consulate, journalists, techies from across the state with a nose for free beer and, of course, Venture Café first-timers looking for jobs.

“You can tell who’s looking for a job,” says Michelle Darby, co-founder and CEO of Roomzilla. “They’re the ones wearing suits.”

Venture Café is New England’s largest weekly networking extravaganza for the startup community. In conference rooms around the main gathering area, venture capitalists hold office hours to advise new companies on securing funding. It’s one of the most effective amenities of the Cambridge Innovation Center – the Kendall Square shared office space of more than 700 start-up companies. The meet up, held in the CIC’s offices, is open to all, but the home of a lucky few. Every Thursday, this social event could be your workplace.

Ostensibly a landlord, and often mistaken for a startup incubator, the CIC offers low-cost, month-by-month leases to fledgling companies. But it’s always been something more than a cheap address with subsidized massage therapy, access to a machine shop and conference rooms overlooking the Charles. It’s a clubhouse for young companies supporting each other’s growth. It’s a witness to (and cause of) the resurgence in Cambridge entrepreneurial culture. It’s a magical place housing more startups than anywhere else on earth.

“I like to think of us as an innkeeper,” says Tim Rowe, CIC founder and CEO.

The CIC has launched thousands of companies during its 15-year tenure. Venture capitalists now rent space in the Center to catch ascending talent. Its beginnings were a little more humble: Rowe and his wife Amy needed offices for their own startup. Four years out of Sloan, the two left their consulting jobs to start a social fitness website in 1999. But Boston didn’t have offices built for young companies; local leases required multi-year commitments and were so expensive that, even after Rowe teamed with other startups to split the rent, his dad still had to cosign. When Rowe’s company closed at the end of the dotcom boom, the shared office idea took off. It became a central location for startups from biotech to big data to a company bottling soup, which made it a central place for capital, which attracted more startups to Cambridge, which grew the shared office space idea. CIC runs a handful of offices around the city and will soon open in St. Louis and the Netherlands.

Though he’s always on the lookout for new perks for his residents (“It turns out everything is really cheap when you divide it by 2000 people working here”), Rowe’s secret weapon is the community he very intentionally fosters. CIC’s hallways were specifically designed to encourage companies to interact. And it works: Maia Heymann, a venture capitalist with Common Angels, has funded at least one project from a chance run in.

“If you need something, there’s always someone who has access to it. If you want to sell your product to Gillette, someone’s cousin works there. But you need to be part of a community to have that happen,” Rowe says.

Michelle Darby, Roomzilla’s not-usually-wearing-a-suit CEO, might be the quintessential CIC tenant. A one-woman company designing software to streamline conference room reservations, her clients include Harvard and MIT. But her first client was the CIC itself. Rowe looked in-house to divvy the scarce conference room real-estate over a zoo of companies. She rents a seat in the C3 – a coffee shop-like space where the smallest renters split open tables. Its community was integral to Roomzilla’s growth.

“I’m an engineer. I know nothing about sales,” she says. “Everyone uses other people’s expertise. Everyone helps.”