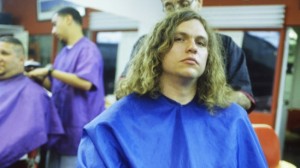 No one is entirely sure of the number of albums released by Jay Reatard and his bands. His record company says it’s more than 90. Wikipedia places it somewhere around 60. Reatard isn’t certain of the exact number, but says that Wikipedia’s discography has some holes in it. He guesses it’s a little more than 70—22 albums and 50 or so 7-inches. By his math, he has recorded somewhere in the range of 475 songs. And he throws away more songs than he keeps.

It would be an incredible catalog for a 70-year-old. Reatard is only 29. He has been recording deviously uncomplicated, snot-nosed garage punk since he dropped out of eighth grade 14 years ago. By a conservative estimate, he has recorded one song every two weeks.

This is the worst of all possible worlds. It isn’t the indignity of being wrong or demonstrating his own mistake. For Reatard, recording full length albums is the circle of hell reserved for musicians — a circle he has volunteered to pass through an astounding number of times. Full-length albums are deliberate, perfectionist things, and Reatard plays all of the instruments on his solo work. The first time he released the track “I’m Watching You” it took him an hour to record. The second time, the version that appeared on this year’s Watch Me Fall, it took three days. Albums just don’t hold the same function as singles. More than merchandise, even more than art, Reatard values the three-song record as an “emotional snapshot.” The 50 7-inch records form a photo album of sorts.

“Outside of promo pictures, I think I only have two photographs of me from the age of zero until I was 20,” Reatard says. “I almost think of a lot of the early records I’ve made as a replacement for that. I can listen to a record and remember exactly what I was pissed or happy about or inspired by.”

Reatard swears that, if challenged, he could remember how to play any of his unbelievably large number of songs. He doesn’t see how impressive that is. He says that his songs are written for him to remember: simplistic music penned for a man who, by his own design, is not a virtuoso on any instrument.

“It’s the same way I could probably play any Ramones song right now,” he says, glossing over the fact that he’s actually recorded more songs than The Ramones. No matter what Reatard says, it is difficult to remember 70 albums’ worth of anything (or 60, or 90).

He has, at this moment, recorded more than 19 hours of music. At this rate, by the end of 2012, he will have recorded a full day. By 2016, he will overtake the battery life of an iPod. Quantity over quality? Quantity over sanity.